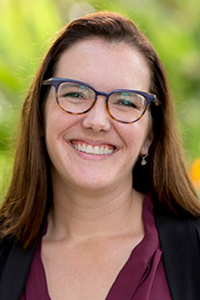 Tiny Earth Partner Instructor
Point Loma Nazarene University
Dr. Katherine Maloney is an organic chemist who brings her expertise in natural products isolation and structure elucidation to the Chemistry Department. She first fell in love with organic chemistry as an undergraduate at Pacific Lutheran University in Tacoma, Washington. She went on to get her Ph.D. in 2006 with Jon Clardy at Cornell University, and came back to the west coast for a post-doc with Bill Fenical at the Scripps Institution of Oceanography. Maloney began her independent career at Harvey Mudd College in 2009 before moving back to San Diego to join the PLNU faculty in 2012. When she’s not teaching or directing undergrads in the research lab, she enjoys spending time at the beach with her husband, Chris and sons Carlton & Timothy.

Her research has been featured in Chemical & Engineering News and in a video series called “Adventures in Genomics” produced by Illumina (a San Diego biotech company). She can be found at 4:25 in the seven-minute video titled, “Taking a Stab at Pierce’s Disease.”