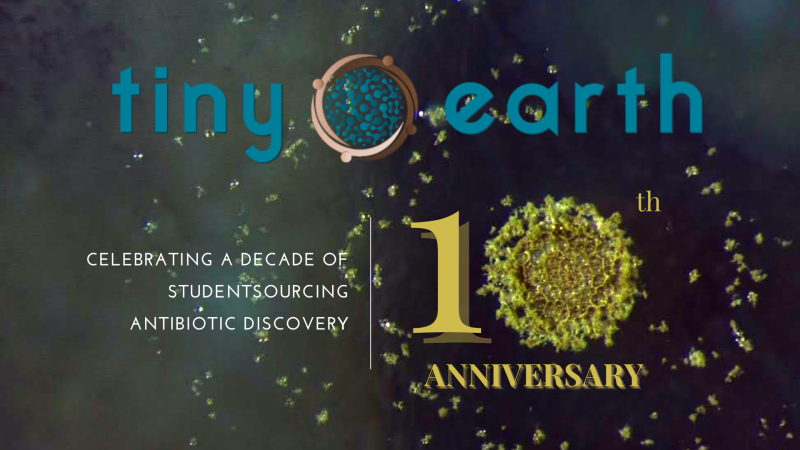 Before Tiny Earth was established as a global network in 2018, the idea of studentsourcing antibiotic discovery emerged from “Microbes to Molecules”—An undergraduate biology course developed and taught by Dr. Jo Handelsman in 2012 at Yale University. Through her passion for soil microbes and vision for engaging diverse and underrepresented students in authentic hands-on research, the six-student course transformed into a community of students and instructors from around the world dedicated to addressing the antibiotic resistance crisis. In the last 10 years, the Tiny Earth network has refined its structure and strategic priorities to provide robust programming from curriculum, training, community engagement to scientific discovery.

By 2013, a cohort of 27 instructors from across the country gathered for Tiny Earth’s first training at Yale University. A decade later, several of these Tiny Earth Partner Instructors (TEPIs) remain connected to the network, teaching Tiny Earth, serving on our committees, and training new instructors to bring Tiny Earth to other institutions and disciplines beyond microbiology. In the next few years, the network grew exponentially with hundreds of instructors around the world responding to Tiny Earth’s call to action.

Dr. Jo Handelsman was appointed by President Barack Obama to serve as the Associate Director for Science at the White House Office of Science and Technology Policy in 2014. While Dr. Handelsman advised our nation’s leaders on U.S. science policy and support for scientific research, a small-but-growing number of instructors continued to teach the course and expand training. The network went worldwide in 2014 with TEPIs from Canada, United Kingdom, Malaysia, and Belize joining the effort. The next year expanded training to include sites in California, United Kingdom, and Jordan. By 2016, instructors across Spain began developing their own branch of the network, MicroMundo, with now over 100 trained instructors from 25 participating hubs. During this time, several TEPIs emerged as leaders, including Nichole Broderick and Debra Davis.

After serving at the OSTP, Dr. Handelsman returned to her alma mater in 2017, the University of Wisconsin-Madison, where she assumed the role as Director of the Wisconsin-Institute for Discovery and was named a Vilas Research Professor. At the time, she hoped to build a chemistry lab to determine whether active compounds found in Tiny Earth collected soil were novel antibiotics, which became a reality the following year.

Tiny Earth As We Know It

With the return of the network’s founder, Tiny Earth became headquartered at the Wisconsin Institute for Discovery, an interdisciplinary research institute at UW-Madison. A robust team of scientists developed the Tiny Earth Chemistry Hub (TECH) to advance the antibiotic discovery pipeline. TECH now houses 3000+ isolates from 23 contributing institutions in the U.S. and is analyzing the metabolomic and genomic profiles of 21 high priority isolates. The Tiny Earth Database was also created to serve as a data management tool for students, recording soil and isolate data from around the world. The diversity of soil environments, culture conditions, and isolates is a rich asset to TECH and its mission of antibiotic discovery.

The challenges of 2020 fostered new life into Tiny Earth. In the face of the COVID-19 pandemic and social unrest, TEPIs were more dedicated than ever to cultivate change and keep doors of discovery open for their students. Tiny Earth pivoted the wet-lab curriculum to online and made more intentional steps to implement principles of antiracism, justice, equity diversity and inclusion (AJEDI) into our programming and curriculum. These rapidly-changing areas led to the creation of several committees and working groups.

Tiny Earth continues to expand beyond biology and microbiology. TEPIs have adapted the curriculum to include Bioprospecting, Genomics, Chemistry, Metagenomics, and Transposon Mutagenesis.

Bigger and Stronger Than Ever

More and more opportunities have arisen for TEPIs to engage in the network and students to discover research opportunities in several scientific fields. In the last year, Tiny Earth committees have honed in on their priorities to make Tiny Earth more relevant to pressing issues in science. With the expansion of the Science and Discovery committee in 2021, TEPIs have formed working groups and communities of practice to evaluate Tiny Earth science protocols, database, and assist other instructors in publications. The release of Dr. Jo Handelsman’s A World Without Soil, inspired the network to create more emphasis on protecting our soil and acknowledging the land we source natural products from. There has been growing interest to expand Tiny Earth to include soil curriculum.

In collaboration with Codon Learning and National Institute on Scientific Teaching (NIST), Tiny Earth has created a team of diverse educators to develop a Scientific Teaching Course (STC) that integrates AJEDI principles. The project is generously funded by the William and Flora Hewlett Foundation, which supports open education resource projects.

This year was our biggest training output to date. Over 86 TEPIs were trained across 3 trainings. Instructors came from 73 institutions in 7 countries and 29 U.S. states and territories. Additionally, 7 new TEPIs became Certified TEPI Trainers.

Through the perseverance and commitment of our instructors, students, and partners Tiny Earth have thrived during this exciting decade, growing bigger and stronger than ever. Thank you to our Tiny Earth leadership TEPIs, Tiny Earthlings, and sponsors, and for making this network possible. A special thank you and congratulations to Dr. Jo Handelsman, recently honored as National Academy of Inventors fellow, for her influential contributions to science and equity and inspiring our community towards continued growth.